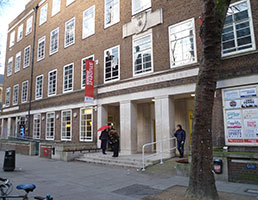 The Independent Workers' Union of Great Britain (IWGB) is filing a landmark test case against the University of London that could broaden the trade union rights of outsourced workers.

The IWGB will argue that outsourced workers - including receptionists, security officers and porters, working at the University of London but technically employed through facilities management company Cordant Security - have the right to collectively bargain over pay and conditions directly with the university.

Denying these workers the right to collectively bargain with their de facto employer is a breach of article 11 of the European Convention on Human Rights, the union will argue. The case is being filed before the Central Arbitration Committee (CAC).

IWGB general secretary Dr Jason Moyer Lee said: "When it comes to the most important elements of pay, and terms and conditions for the outsourced workers, it is the University of London and not Cordant which calls the shots. In order for these workers' collective bargaining and human rights to mean anything, we need to be able to negotiate directly with the university, not the glorified middleman."

Moyer Lee told FM World it would take "a month or two" before the case will actually begin and that the union would be arguing for a joint employment outcome - a similar law to that which exists in America.

"The idea is to basically have the law recognise that the University of London is the one calling the shots on pay and condition and should be considered a joint employer alongside the contractor [Cordant]."

In a statement, a University of London spokeswoman said: "The university has long recognised two trade unions, UCU and Unison. It has received a request from the Independent Workers of Great Britain trade union for recognition covering security guards, post-room workers, AV staff, porters and receptionists who are all employees of our contractors Cordant.

"The university does not employ any of these workers and does not accept that the relevant legislation recognises the concept of joint employment. We have therefore not agreed to the IWGB's request for recognition.

"The IWGB is involved in a long-running dispute over the terms and conditions of the individuals employed by the University's contractors. The university has already begun a review of the performance of the university's contracted facilities management services and as part of that review will be discussing with the contractor the pay, conditions, benefits and development opportunities for the contractor's employees."

Trade union barrister John Hendy QC and employment law barrister Sarah Fraser-Butlin will represent the IWGB. The case will be backed by The Good Law Project.

Cordant did not comment when approached by FM World.

Outsourced workers were on strike this week at the University of London as part of the IWGB's 'Back in-House' campaign.