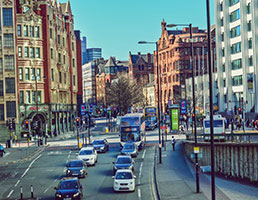 Interserve has won a place on major highway and infrastructure frameworks in Manchester and across the Yorkshire and Humber Region.

The framework lots to which Interserve is appointed have a potential value in excess of £500 million.

These public sector frameworks provide opportunities to deliver projects for local authorities and other public sector bodies within the North West and Yorkshire.

Procured by Manchester City Council, the new flagship framework for the North West will run for four years and cover work for clients across Greater Manchester and the wider region, and will comprise highways works, infrastructure and civil engineering projects.

Appointment on the Manchester framework follows on from Interserve winning places on the four-year YORcivil2 Frameworks, which cover a wide range of infrastructure projects including highways, structures and flood alleviation works for local authorities and other regionally based public sector bodies.