Only one in three office workers takes work breaks 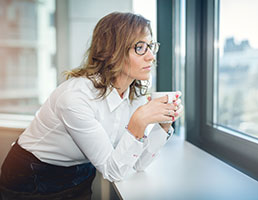 One in three office workers feels unable to make the most of breaks at work.

A third (33 per cent) of office workers feel that their employer and/or working environment does not allow them to make the most out of taking a break at work, according to the results of a survey.

Conducted by One Poll on behalf of Nestlé Professional, the survey of 1,000 UK adults working in an office environment for a small and medium-sized enterprise also highlights the potential need to 'seize the break'.

It shows that 13 per cent of office workers are failing to take a break during an average working day and 19 per cent only take time out for lunch.

Despite this, however, 97 per cent of office workers say taking time out of the working day to have a break would make them feel more positive about their work or more organised in the way they work. Meanwhile, 73 per cent of respondents indicate that having a break makes them feel better able to solve problems or handle their workload more easily.

The research also reveals that when it comes to time away from the desk, it appears that '10 minutes is all you need', with more than a third of office workers (37 per cent) taking breaks of between 6-10 minutes on average. The most popular time of the day to take a break is between 10am-11am (49 per cent), followed by 3pm-4pm (36 per cent).