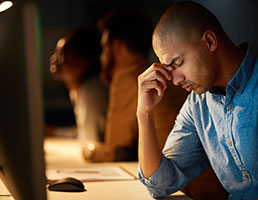 Thirty-four per cent of office workers believe that winter affects their productivity, according to the results of a survey by workplace consultant Peldon Rose.

The findings also reveal that 50 per cent of workers say winter adversely affects their mood, 42 per cent believe it has a negative effect on their mental well-being, and 35 per cent actually identify themselves as suffering or having suffered from SAD - a mood disorder exhibited at the same time each year, most commonly in winter.

More than half (55 per cent) actually state that they feel like 'pulling a sickie'.

The workplace contributes to the 'depressed mood', according to Peldon Rose, with most employees (56 per cent) saying "they feel unappreciated or only sometimes appreciated by their company" and 31 per cent believe their office environment has a negative effect on their well-being - 54 per cent specifically stating that a cold office negatively affects their mood.

Jitesh Patel, chief executive at Peldon Rose, said: "Businesses should tailor the workplace and office environment around them and their identified needs. By doing this it will help improve wellbeing and mood and ultimately help boost productivity."