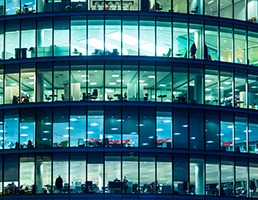 Total commercial office space take-up for the year amounted to over 10 million square feet for the first time, according to data published by GVA.

Five Government Property Unit deals over the summer contributed to record levels of city centre activity in Cardiff, Edinburgh, Liverpool, Leeds and Birmingham with the latter two cities joining Manchester in achieving over a million sq ft of take-up, according to the property advisory group.

In the final quarter serviced office provider Regus took 155,000 sq ft of space in four deals across three cities. Elsewhere there were a handful of circa 80,000 sq ft deals signed: the largest was to engineering firm Babcock on Bristol Business Park, there were two government deals at Atlantic Quay in Glasgow and Leeds Building Society signed at Sovereign House, Leeds.

Activity in the out-of-town market slowed during the last quarter, with Bristol the stand out performer compared with past take-up.

In terms of sectoral activity for the year, the GPU deals lifted the public sector to 28 per cent of all take-up, although without these deals city centre take-up was still 6 per cent above the five-year average.

This accounted for 9 per cent of all activity over 5,000 sq ft and compares to an average over the previous five years of 87,000 sq ft per annum. Birmingham (36 per cent) and Manchester (24 per cent) have seen the highest levels of activity, with Regus (31 per cent) and WeWork (16 per cent) the most acquisitive operators.

As well as the GPU deals, PwC has taken further space at Chamberlain Square in Birmingham and Central Square in Leeds, while reducing its floorplate in London, and the Royal Institute of Chartered Surveyors (RICS) has moved its headquarters from Coventry to Birmingham.

Carl Potter, national head of offices for GVA, said: "We expect deals to the public sector and co-working office space to continue to drive demand. There are still GPU deals to complete in the first phase of the government's relocation and the recent industrial strategy has committed to further phases and more jobs moving from London. The GPU deals will provide a foundation to employment growth, contributing a critical mass to place-making schemes that are increasingly retaining talent and reinvigorating the city centres."