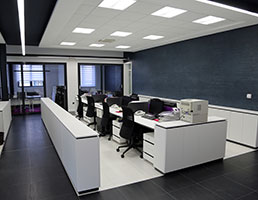 This, combined with continuing extraordinary demand from the technology, media and telecommunications (TMT) and biotech sectors, risks a supply shortage as companies increasingly look at pre-lets.

Knight Frank's The London Report demonstrates that London's economy and therefore the central London office market has been particularly resilient in the face of Brexit, and that the current pace of job creation is likely to outweigh any lost to overseas markets post-Brexit.

In 2017 London's office market experienced particularly high levels of demand, with 4.1 million sq ft acquired in 2017, 31 per cent higher than the average. This has been driven by the TMT sector, which is increasingly seeking higher volumes of office space, particularly in the sub-5,000 sq ft category, on top of the new trend towards flexible office space that appeals to both start-ups and established corporate occupiers.

There is a lack of quality office space supply because, despite the fact that more than 259 development schemes are under construction in Central London, 187 are residential, and of the remaining 72 offering commercial space, only two-thirds are available to lease, with many of them already pre-let to office tenants.

Furthermore, the development pipeline has meant that more than a quarter of these buildings will not be available until 2020, creating a short-term squeeze for any companies needing to move in the next two years.

Stephen Clifton, head of central London at Knight Frank, said: "Central London's office market witnessed a high volume of activity in 2017 with record take-up by TMT firms.  Whilst this shows tremendous confidence in London after the EU referendum, supply also peaked in 2017 and is now in the process of falling. This implies that going forward there will be increased demands for pre-lets as there is a lack of quality supply in the pipeline, and this will put pressure on developers, landlords and operators in the market.

"It is clear that occupiers are increasingly considering their real estate strategy a core part of their business decision-making process, whether that be the design, co-working space or amenities. As such, landlords must adapt to accommodate occupier requirements and ensure that the central London office market continues to flourish."