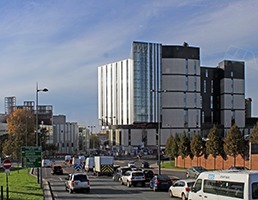 Facilities management staff at the Royal Liverpool Hospital left uncertain of their future after the collapse of Carillion will be transferred to a new company.

The Hospital Company (Liverpool) is a private sector consortium which will set up the new entity.

In a statement a spokesman at the Royal Liverpool and Broadgreen University Hospitals NHS Trust said they acknowledged that "facilities management staff are concerned and we know that this has been an uncertain and difficult time for them" and that the trust's "primary concern is for staff".

He said the Hospital Company (Liverpool) has "plans for a new company to be established that facilities management workers will be transferred to".

He added: "In the meantime, the Hospital Company (Liverpool) is paying PwC weekly so that staff and subcontractors continue to be paid by PwC and services continue to be delivered at our hospitals.

"The trust is liaising with the Hospital Company (Liverpool) and is keen that a new company is established as soon as possible. However, these talks are complex and may take some time.

But Unite, the country's largest union, has expressed concerns that the CEO at the Royal Liverpool Hospital, Aidan Kehoe, had refused to meet the union over the future of maintenance staff now in employment limbo because of the Carillion collapse.

Unite regional officer Keith Hutson said: " These workers are in an employment limbo through no fault of their own - they are the victims of the feral capitalism that was the cause of Carillion's dramatic collapse.

"The fact that highly paid NHS boss Aidan Kehoe is unable to meet Unite to discuss the future of this group of hardworking maintenance staff is a disgrace and a snub.

"These workers are responsible for the daily maintenance of the trust's buildings and all the health and safety implications this entails. They are separate from the new build at the Royal Liverpool Hospital, which is unlikely to be finished this year."

He added: "The mature and sensible way forward would for the trust to take these jobs back in-house."

But the spokesman at the Royal Liverpool and Broadgreen University Hospitals NHS Trust denied that Kehoe was refusing to meet workers' representatives.

He said: "We haven't refused to meet with Unite and the chief executive is meeting with various trade unions, including Unite, later this month. Facilities management staff have had the opportunity to talk to the chief executive directly at our monthly face-to-face brief with staff and we are doing everything we can to ensure they are kept up to date by the trust."