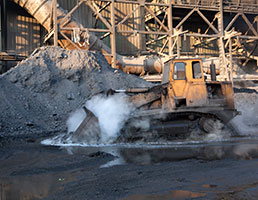 A survey from non-profit-making Considerate Constructors Scheme reveals that 84 per cent of respondents regard air pollution in the construction industry as a problem.

The findings have motivated the group to launch its 'Spotlight on air pollution' campaign to raise awareness of how the construction industry can reduce air pollution caused from activities in and around construction sites.

Of the more than 600 respondents from across the UK and Irish construction industries, two-thirds feel the industry is not doing enough to remedy the situation.

The Considerate Constructors Scheme makes about 18,000 monitoring visits to construction sites, companies and suppliers a year and has provided practical steps, resources, regulatory information and case studies - from Canary Wharf Contractors Ltd, Costain, the Institution of Civil Engineers, Interserve, Mace, Sir Robert McAlpine, and TfL - to find ways of solving the problem in the short, medium and long term.

The scheme's CEO Edward Hardy said: "A staggering 40,000 deaths a year are linked to air pollution in the UK, and many people are suffering long-term health problems caused by poor air quality. As construction is a significant contributor to air pollution, it is essential for the industry to put measures in place to clean up our air by working together to reduce our impact on air quality."

Professor Peter Hansford FREng FICE, chair of the Institution of Civil Engineers Air Quality Task Force, said: "[ICE] is delighted to be partnering with the scheme for the launch of its 'Spotlight onair pollution' campaign. The scheme offers a golden opportunity for the industry to 'up its game' in relation to air quality around our construction sites and is a key driving force in helping to address this issue across the industry."