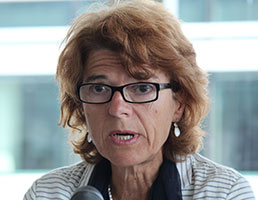 Vicky Pryce, economist and former joint head of the United Kingdom's Government Economic Service, has been confirmed as the keynote speaker at this year's ThinkFM.

The prominent economics expert will open the flagship conference on 1 May and will host the first session of the day, entitled 'The age of uncertainty and the commercial world of FM'. It will reflect on the macroeconomic shocks that FM professionals will face in the coming years - including potential major changes to outsourcing and PFIs.

Drawing on her broad experience of economic policy, Pryce will provide insights into how such changes can be dealt with advantageously.

Pryce has been senior managing director at FTI Consulting and was the first female director general for economics at the DTI, a predecessor to the Department for Business, Energy and Industrial Strategy (BEIS). As joint head of the UK Government Economics Service, she was jointly responsible for evidence-based policymaking and for encouraging measures that promoted greater productivity in the UK economy.

She has previously been partner and chief economist at KPMG and earlier held chief economist positions in the banking and oil sectors. In addition to this she co-founded GoodCorporation, a company set up to promote corporate social responsibility. Since 2015 she has been a board member of world finance and economics policy forum Official Monetary and Financial Institutions Forum (OMFIF).

The Greek-born economist is also a commentator and author, and in her latest edition of Greekonomics she explores the history of the eurozone, and the causes of the crisis that almost led to 'Grexit' and suggests solutions.

BIFM's commercial director Jacqueline Balian said: "Drawing from her vast experience she will be talking about the 'dark art' of economic forecasting and whether we should believe what the pundits say; and taking a fresh look at Brexit and the rebalancing of the economy - financial services versus manufacturing, North versus South."

Pryce will be joined by other industry leaders exploring topics including PFI, outsourcing, Big Data, AI, automation and FM expertise from an international angle.

An early-bird offer runs until this Friday 2 March. During this period, the delegate rate is £359+VAT and BIFM members can attend the conference for £309+VAT.

For those wanting to raise their brand profile within the industry, sponsorship and exhibitor packages are still available at: www.thinkfm.com/sponsorship

More details on speakers and the programme will be released over coming weeks. Visit www.thinkfm.com and follow @ThinkFM for all the latest conference news and updates.