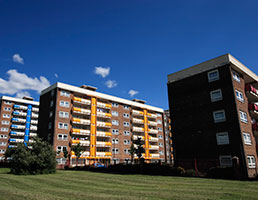 Official figures released by Ministry of Housing, Communities and Local Government show that flammable cladding similar to that used on Grenfell Tower is still being used on buildings across the country.

Data from the Building Safety Programme, which publishes monthly updates on the high-rise residential buildings in England that have unsafe cladding - including information on the remediation of social housing buildings - states that across the country there are currently 301 buildings over 18 metres high with similar cladding to that used at Grenfell.

Of these, 158 are social housing buildings. Of the social homes affected, 42 per cent of buildings have not started works on removing or replacing the unsafe cladding.

Polly Neate, chief executive of housing charity Shelter, said: "This is cladding which has failed safety tests and is considered unsafe. It's shocking that more than eight months on from the Grenfell fire only a tiny proportion of unsafe cladding has been replaced on homes across the country.

"The government's lack of leadership has driven delays and caused confusion and it must now step up and take responsibility for ensuring these homes are safe. We urge the secretary of state to do this by providing total clarity on fire safety and much clearer guidance on who should pay for and carry out these essential works."