FMs are 'key to reducing use of bottled water' 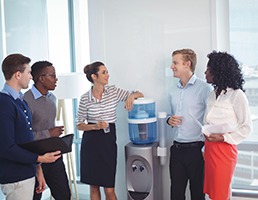 Water filter firm Zip Water UK is suggesting that those responsible for providing drinking water in the workplace have a key role in the health of workers.

The claim follows a study, commissioned by data analysts Orb Media, which claims to have found an average of 10 plastic particles - each larger than the size of a human hair - for every litre of water being sold. A further 314 smaller particles per litre assumed to be plastic were discovered.

"Anyone responsible for specifying the drinking water system for an organisation - no matter the size - is playing an important role in maintaining the health of the users as well as the environment," said Russell Owens, marketing director of Zip Water UK.

"The fact that bottled drinking water is likely to be contaminated is hugely concerning, particularly as it's still common for workplaces to have water coolers, which use bottled water.

"When considering drinking water systems, bottled water is often chosen as it is perceived to be purer. However, if microplastics are also present in bottled water, users may well be ingesting more of these particles than they think.

"Those in a specification or maintenance role have the chance to influence the eradication of plastic bottles. We are all aware of the detrimental impact plastic has on the environment, but we now know that our health could be at risk too. I'd urge facilities managers to look at other options for their drinking water supply to avoid bottled water."