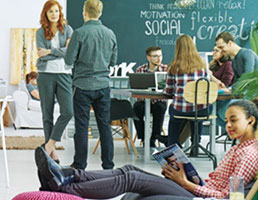 Nearly two-thirds of companies (62 per cent) plan to increase their investment in real estate technology over the next three years, most of them in the next year.

The 2018 EMEA Occupier Survey by real estate adviser CBRE reveals that companies are intending to invest more heavily in new real estate technologies over the short to medium term to enhance the user experience and raise workforce productivity.

This represents a clear move away from aiming real estate technology at purely operational goals such as energy management.

The technologies being employed include wayfinding apps, connected sensors, wearables and personal environment control systems. Room or seat reservation systems and sensors are also being increasingly adopted to support improvements in space efficiency.

According to CBRE, over the past few years, there has been "a seismic shift in occupier demands, placing an increased focus on user experience alongside employee engagement, productivity and wellness benefits".

Richard Holberton, head of EMEA occupier research at CBRE, said: "These changes will place new demands on management of the real estate asset, entailing a shift towards better service levels and more consumerisation. This is effectively a growing fusion of workplace and service, reflected in widespread plans to hire new skills such as data scientists and digital information officers."

Companies are also seeing flexible office space as a key element of their corporate portfolios. The proportion of companies making no use at all of flexible space is expected to decline from 35 per cent to 21 per cent, indicating a growing awareness and broadening of interest even among previous non-adopters.

Occupiers are also increasingly differentiating among the various types of flexible space available, and in general favouring co-working space.

All see double-digit increases in their expected level of use in three years' time compared with now.  The increase is most marked for co-working space, which sees a rise of over 20 percentage points to 56 per cent, taking it above serviced/furnished space as the most popular type of flexible space.

Holberton added: "It is increasingly likely that some larger corporations will respond to the emerging flex market dynamics by developing their own bespoke co-working environments, which mirror the design, service and 'vibe' of third party spaces, supported by similar technologies and concierge solutions, but delivered and operated directly to preserve the relationship between employer and employee."

Four out of five occupiers already have, or plan to introduce, wellness programmes and an even higher proportion have some degree of preference for wellness enabled/capable buildings. This is supporting a range of innovative approaches to delivering and measuring wellness, including broadening and adapting the offer and seeking to measure the impacts.