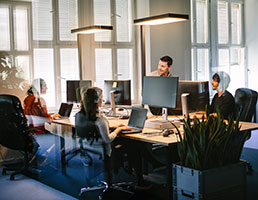 Over a third of workers are adversely affected by a lack of natural light in their offices.

A poll carried out by Lamp Shop Online quizzing employees about the difficulties associated with workplace lighting reveals that headaches and dizziness are a problem for one in seven.

Other employees report finding the lighting too bright and dazzling (12.4 per cent), while one in 10 say they have to strain their eyes due to a general lack of light.

A similar proportion say they are bothered by the position of the lights and by the 'stressful environment' created by their workplace lighting (9.3 per cent each).

The findings come as reports of 'sick building syndrome' - a condition associated with office work that causes symptoms including headaches and respiratory problems - continue to hit the headlines.

Such symptoms are usually attributed to unhealthy or stressful elements of the working environment, such as poor ventilation and lighting.

According to the latest figures, an estimated 137.3 million working days were lost owing to sickness or injury in the UK in 2016  or 4.3 days a worker  the most common reason for which was minor illnesses.

Many of the ailments synonymous with sick building syndrome, including headaches and dizziness, can be reduced through changes to lighting in the room.

Fluorescent tubes in offices are often cited as a source of complaint. Many companies now opt for LED panels, which produce light with a far lower unified glare rating, reducing discomfort for employees.

Rob Holroyd, digital marketing manager at Lamp Shop Online, said: "What many employers and facilities managers are continuing to neglect is that the fluorescent tube lights commonly used in offices are likely to be causing harm to employees, in one way or another, on a daily basis.

"Not only do they create glare and cause headaches, they're seldom replaced when needed, forcing staff to work in darkness, which in turn strains their eyes.

"Where possible, natural light should be maximised in the workplace since it's proven to benefit the health and well-being of employees. But thanks to advances in lighting solutions, such as the development of low-glare LED panels, poor office lighting need no longer be the cause of physical or mental health complaints."

Panels are also available in a range of 'colour temperatures' to suit different environments. The higher the colour temperature (in Kelvin), the cooler the light - or the closer to natural daylight it is.

A colour temperature of 4,000 Kelvin is preferred in most office environments because of its crisp, white working light, while 6,000 Kelvin imitates daylight more closely and is therefore favoured in some workplaces.

The data was gathered in February 2018 through an online survey of 822 members of the UK public.