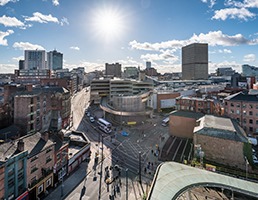 Planning reforms are needed to enable cities such as Manchester, Leeds and Birmingham to provide commercial space they need in order to survive, according to research from a think tank.

The report by the Centre for Cities shows that the number of people living and working in Manchester, Leeds and Birmingham city centres has soared in comparison with other cities across the country.

However, it also warns that planning reforms are needed to enable these cities to provide both the commercial space and housing they need to continue to thrive.

It shows that the cities that have seen the biggest growth in their city centres over recent decades are not those with long-established successful economies (which are largely in the South East), but instead the major urban centres of the North and Midlands, which until recently had struggled to shake off their post-industrial hangovers.

Manchester has seen the highest city centre growth in England and Wales in recent decades (as measured by combined jobs and residential growth in central areas), followed closely by Leeds, Birmingham, and Liverpool.

One of the report's key recommendations includes allowing cities to exempt city centres from permitted development rights to give cities "more scope to protect their commercial centres, and to ensure they have the office space required to attract more businesses and jobs in future".