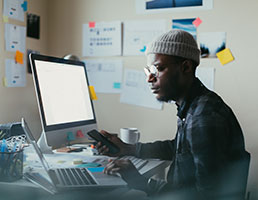 Millennials in the UK are turning their backs on potential employers because of poor and 'uninspiring' office design.

A study commissioned by co-working provider Mindspace, in conjunction with research firm One Poll, reveals that employers are struggling to attract and retain young talent because of the importance that generation is placing on the aesthetics and vibe of the workplace. The survey revealed that Britons are becoming increasingly bored with their current office environment (31 per cent), and uninspired to go to work. Another 28 per cent of workers think their place of work is outdated and dull.

Over a fifth (21 per cent) of 18-24 year olds admit that they have rejected a potential employer because of the poor design of the office or lack of amenities available. Another 34 per cent in the same age group would be willing to commute for a maximum of an hour each way to an office that is considered perfect - compared with only 22 per cent of those aged 45 to 54.

This signals the urgency and importance of workspace design and its impact on company culture. Sixteen per cent of those aged 18 to 24 reveal that they have actually left a previous job because the office was poorly designed.

Benefits and perks are also important for many UK millennials, with 26 per cent of those aged 25 to 34 saying a company's benefit packages (such as discounted massages and dog-walkers) is one of the most important factors for them when considering an employer.

According to the research, Britons visit the same workplace five days a week (82 per cent) and work from the same desk in the office (80 per cent), but they are bored and uninspired by their working environments. This has a detrimental effect on their productivity and mental health, and many state that they feel tired (24 per cent) and stressed (20 per cent).

As expected, while many say they have access to amenities and features such as a kitchen (72 per cent), meeting rooms (66 per cent) and free tea and coffee (53 per cent), what UK office workers desire most to improve morale is more natural light, air conditioning and improved interior lighting.

Although many companies in the UK have embraced open-plan offices over the past few years, a significant number of workers (46 per cent) feel that there is either limited or no collaboration between different teams and departments in their office. Nearly one in five (19 per cent) do not feel that their office encourages them to collaborate with others, but a quarter (25 per cent) are desperate for breakout areas, more spaces for private work (23 per cent) and more creative brainstorming spaces (19 per cent).

Dan Zakai, co-founder and CEO at Mindspace said: "Millennials are the future of the workforce and will constitute over 50 per cent of the working population in the next few years. It's insightful to see that so many graduates and young workers are turning their back on potential employers because of the poor design of their office. While many young workers in the UK still value a good workplace culture and decent salary, employers need to start placing a much larger emphasis on the aesthetics of the office and fostering a more collaborative workspace in order to retain and attract the best young talent through their doors."

Mindspace offers artistically designed, high-end co-working spaces that put companies, departments, start-ups and teams of all sizes in a collaborative environment. Mindspace operates 16 locations worldwide and recently opened its first UK space above Aldgate East Tube Station in London. Its second UK space is scheduled to open in London's Shoreditch in May. Members can access Mindspace properties 24/7 while gaining unlimited access to all locations around the world at no additional cost.

 Separately, employee benefits platform Perkbox and SEMrush, the online marketing suite, examined the most trending 'millennial' online searches related to the workplace and found in 2017 the phrase 'what do millennials want at work?' was searched 3,600 times in the UK.

The UK seems most concerned about millennials' health. 'Why are millennials so depressed?' appears among the top UK online searches by keyword 'millennials' with an average of 2,800 searches over the last year. In the US, on the other hand, searches are nearly two times lower for that question during the same time period.

The US seems most worried about what impacts motivation. 'Why are millennials so lazy?' has topped US online searches about millennials over the past three years (2015-17). The average number of searches was 2,227 a year.