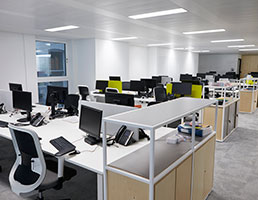 Office floor space in the UK is shrinking both on regional and local levels, according to research by property experts.

A study by commercial property firm Savoy Stewart found that despite a significant and steady growth in office floor space, Greater London experienced the most dramatic decline in office floor area available per business.

Wales experienced the least dramatic decrease (-8.7 per cent) but it offers only 33.5 sq m of office floor space per business.

A similar situation was also observed in the East Midlands and the South West. Despite a relatively small decline rate, the two regions surpass only the East England (25.4 sq m) when it comes to office size, offering 26.2 sq m and 27.6 sq m of office space per business, respectively.

Savoy Stewart also analysed the change in office floor area relative to business growth in major cities and towns across England and Wales. The most significant decline was observed in Manchester, where office floor space available per business shrunk by a staggering 33.2 per cent. Despite that, the capital of the North has some of the largest offices in the UK.

Researchers say the study was undertaken because of the recent boom of the so-called 'micro-homes' in Britain; Savoy Stewart decided to investigate whether the 'micro-trend' had taken root in the office sector too.

Darren Best, managing director at Savoy Stewart, said: "The results of the research don't necessarily suggest that offices in England and Wales have physically become smaller, but there has probably been downsizing in floor space as well.

"Nevertheless, the overall negative trend in office floor space available relative to the number of businesses is very concerning. And if such a trend continues, I can see only one possible outcome - lack of offices and eventually, shrinking in size to meet the increased demand because business has been growing disproportionally to the office sector."