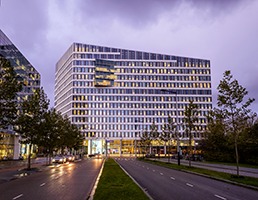 A focus on hospitality and customer experience characterised the learning from a recent educational visit to the Netherlands by British facilities managers.

The trip, organised by the BIFM's international special interest group (ISIG) took place in March and was reported on at a special event yesterday at the British Arab Commercial Bank in the City of London.

The market for FM in the Netherlands has been routinely praised, in particular for the sector being seen by Netherlands nationals as a career of choice by school-leavers. The country's FM education system is seen as world leading, with Breda University in particular highlighted at the event as a major education supplier.

The small group of UK FMs visited the flower market at Royal FloraHolland in Aalsmeer, the Heineken factory in Zoeterwoude, the Edge building and Accenture's office in Amsterdam, and Breda University.

ISIG chair Steve Gladwin presented on the group's findings, citing collaborative contract models ('vested outsourcing'), and the conviction that Dutch clients have about the value of FM, as key takeaways. Gladwin also spoke about the way in which the group's Dutch hosts had emphasised the focus on hospitality, and how customer experience was a component of the sector reinforced through courses provided at Breda University. Technology was also considered to be having "a major impact" on the market.

FM in the Netherlands will also play a part in the next ISIG meeting, at which representatives of OVG Real Estate, which runs The Edge building, will visit the UK to present on their experiences. The event will take place in London on World FM Day, 16th May.

 The FM market in the Netherlands employs 270,000 people

 The market for FM services represents 5% of Dutch GDP