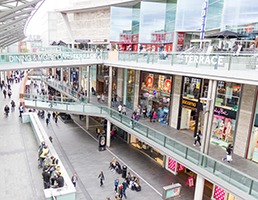 The divide in the commercial property market between retail property and the industrial sector is growing, according to the Q1 2018 RICS UK Commercial Property Market survey.

The weakness in retail appears to be spreading across prime locations, with a challenging backdrop being reported across the whole of the UK.

While occupier demand at the all property level was unchanged in Q1, the sector breakdown shows demand for industrial space still rising, with 31 per cent of respondents noting an increase. This contrasts sharply with retail, in which demand not only declined further but at an accelerating rate. A net 43 per cent of respondents saw a fall in demand for retail property, which is the weakest reading since 2009.

As demand for retail property dropped, availability in the sector rose significantly in Q1, with 43 per cent more respondents noting an increase (as opposed to a decrease). Retail landlords also raised the value of incentive packages to entice clients for a fourth consecutive quarter. This in contrast to a decline in the availability of industrial space.

Looking at rent growth expectations over the next three months, the same split is visible, with contributors expecting to see downward pressure on retail rents growing, alongside rising near term rent predictions in the industrial sector. The negativity across retail is pulling down the headline average for rent growth expectations, with just 3 per cent more respondents predicting a rise rather than fall over the next three months - the lowest since Q2 2016.

Looking at the sector in more detail, secondary retail rents are projected to decline in all parts of the UK over the coming year, while the outlook is patchy at best for prime retail sites. Both prime and secondary industrial markets continue to display stronger rental projections over the year than all other sectors.

On a 12-month view, 24 per cent more respondents predict a fall in prime retail rents, while a net balance of -54 per cent are predicting a fall in secondary retail. The outlook for prime office rents appears comfortably positive (net balance +38 per cent), although expectations remain flat for secondary space.