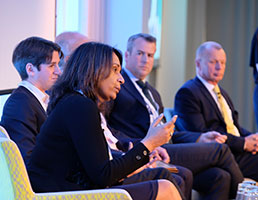 Outsourcing is not broken, but the practices surrounding it need to change.

The panel followed presentations from Waud, Hudson and McFarlane.

Waud identified the major issues with outsourcing in its current form as:

   Too much repeat procurement;

   Insufficient representation in the board room; and

   Too little creativity with procurement strategies.


With many of the "household names" in trouble, Waud reminded the room that profit was not a "dirty word". Instead, he blamed "a market trying to achieve too much service for too low a price".

Waud criticised the notion that "biggest is best" and cited the CCS SME framework as failing to challenge the prevailing sentiment. However, he noted that there was much to be excited about with outsourcing - an industry with "a lot of entrepreneurial opportunity".

Next up was Hudson, who told of UBS's journey from in-house FM through out-tasking - with a proportion of workers outsourced but strategic management kept in-house - to the current model of a wholly outsourced integrated FM model.

Hudson said outsourcing has provided greater freedom for suppliers to innovate, broken down siloed thinking and given more room to UBS to specify its exact requirements.

For good client-supplier relationships, Hudson called for a focus on "vested outsourcing" by which both parties can benefit from the contract.

FM, Hudson said, needs to "move away from just being the custodians of the building and maintaining it to being seen as the people really driving employee well-being". By doing so, FM will also have greater power at board level by being able to show its impact on organisational performance.

From the public sector, McFarlane spoke of the changing faces of outsourcing, moving through the technocratic 1980s to the philosophical late 1990s in which value and purpose were questioned. From 2010, it shifted towards greater accountability and control until the current phase of "holding one's breath" and trying to "make the contributions that it honestly feels like it can make".

McFarlane stressed the importance of the approximately 200,000 companies supporting the public sector. Without them, the sector could not tap into the technological changes happening, he said.

The main challenges public sector outsourcing faces include granting greater accessibility to companies of all sizes, sharing knowledge across the industry and focusing on value beyond cost.


When McGregor-Smith joined the debate, she noted how, despite what the three speakers had said about the necessity for longer-term contracts, there is much value in short-term agreements.

"Everyone knows that with outsourcing, what you sign on day one is rarely what you end up delivering two years later or a year later or even six weeks later," she said.

"Disruptive technology is changing things so quickly," she added, making it difficult to accept long-term agreements as being optimal. What is needed, particularly in the public sector, is "greater flexibility".

McGregor-Smith urged suppliers to understand the bid and align it to the client's needs.

Lester cautioned to stay away from "prehistoric clients" with a focus on cost only.

On the subject of risk transfer in the public sector, McGregor-Smith said PFIs used to be effective but that it was time for a new generation of funding deals better suited to today's requirements.