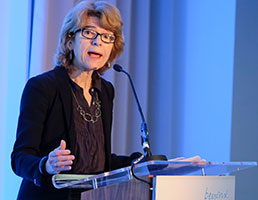 Vicky Pryce, the economist and former joint head of the United Kingdom's Government Economic Service, opened yesterday's ThinkFM conference in London by highlighting the issue of low productivity growth in the UK.

Mentioning the squeeze in profits across various supply chains, and noting the events surrounding Carillion, Pryce talked of slow productivity growth, the result of a lack of investment, being likely to hamper economic growth in general.

She cited statistics that showed the UK's annual average growth in output per hour had dramatically changed in the UK subsequent to the great market crash of 2008. Prior to this date, the UK vied with the US and Germany in productivity growth. Subsequent to 2008, UK productivity growth has been anaemic and grown at a considerably lower rate than the US, Germany, France and even Spain.

In a downbeat assessment of the effects on the UK economy of Brexit, Pryce warned that the withdrawal of EU project funding initiatives subsequent to Brexit in 2019, including European Investment Bank guarantees on various hospital, social housing and infrastructure projects, would be difficult and expensive in both time and money to replace.

Although admitting to not being a sector specialist in FM, Pryce pointed out how construction, energy and business services were among 18 trade sectors identified by the UK government as having convergence with EU policy as a high priority. But she also noted how no Brexit scenario, with whichever mix of single market, customs union or European Economic Community membership, currently shows the UK economy doing better in terms of gross value added (GVA) than it would do within the European Union.

That said, and despite first quarter growth in the UK being just 0.1 per cent, indicators such as unemployment being at its lowest level since 1975 suggested strong underlying conditions, albeit tempered by slowing sentiment across Europe in figures announced in recent months. In the UK in the first quarter, the Purchasing Managers Index (PMI) showed declines in growth generally across sectors, and an actual fall in construction activity.