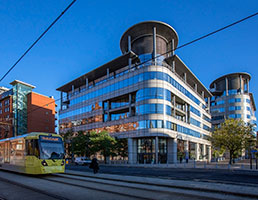 Demand across the main nine office markets has continued in a similar fashion to last year with key deals to the Government Property Unit, indigenous professional services occupiers and co-working office space.

According to the quarterly update of regional office activity Q1 2018 by GVA, the deals to the Government Property Unit in Manchester and Glasgow have headlined take-up and are among the final GPU deals to be announced in the first phase of the government's relocation strategy.

These deals have been supported by some significant transactions to indigenous professional services companies, such as lawyers Walker Morris (Leeds) and Irwin Mitchell (Manchester), as well as engineers WSP in Birmingham.

The co-working sector continues to expand and a handful of medium-sized co-working office deals have completed in Q1, in out-of-town as well as city centre locations, states the update.

Orega has taken space in Birmingham and Glasgow, Bizspace in Cardiff and Solihull and Work.Life in Manchester.

GVA says it is expecting larger deals later in the year.

Manchester has been "the stand-out performer this quarter, both in the city centre and out-of-town markets".

The key deals in Glasgow and Leeds meant they were the only other city centres to achieve above average take-up but out of town there has been a more even share of activity with seven of the nine cities above average.

Occupier sentiment is mixed. While there are a number of large requirements, an increasing proportion of re-gears and a slowdown in demand among indigenous occupiers. But GVA says this may be explained by the uneven nature of take-up and a tightening of grade A supply.

With this low supply the largest deals continue to be pre-lets but there have been several speculative construction announcements this year including Atlantic Square and Cadworks in Glasgow, 100 Embankment in Manchester, and the former Majestic Cinema restoration in Leeds. The imminent sale of the Haymarket site in Edinburgh has also raised expectations for progress on this key site.