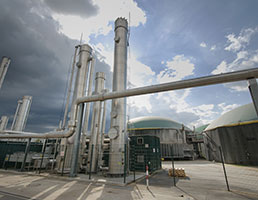 An international report to help cities manage their food waste has been launched this week in Rotterdam.

Global Food Waste Management: An Implementation Guide for Cities has been written by the World Biogas Association (WBA) in collaboration with the C40 Cities Food, Water & Waste Programme.

It sets out the experiences of cities around the world in managing their food waste, and the best practices to adopt for preventing and reducing food waste.

The study provides an overview of: collection systems to make sure clean food waste is brought to treatment; treatment alternatives for inedible food waste, from composting to anaerobic digestion; the use of outputs from the various treatment processes and how to best valorise them; and the policies needed to ensure that food waste is sustainably managed.

The report emphasises the importance of separately collecting and treating inedible food waste, which if implemented on a global level would have the same impact in terms of CO2 emissions reduction as taking all cars in the EU off the road.

Most cities around the world currently do not collect food waste separately, leaving it to be disposed of in dumps, landfills or incinerators. As a result, food waste is not treated and loses its potential to resolve a series of environmental issues.

The report was launched at Blue City, an incubator for circular-economy entrepreneurs based in Rotterdam. The city has developed a strong reputation for being 'green', and is aiming to develop the most sustainable port in the world.

Rotterdam's mayor, His Excellency Ahmed Aboutaleb, was presented with a copy of the report to mark its publication.

As well as presentations from the report's authors, the launch also featured presentations on food waste and the circular economy from sustainability platform Holland Circular Hotspot and from Blue City itself.

The mayor said: "Cities worldwide have to focus on one of the greatest challenges of our century: to ensure balanced progress in terms of economic growth, quality of life, safety and sustainability. We therefore welcome the report from WBA and C40 because it gives a series of implementation guidelines which will be useful on how to use wasted food to produce fuels, nutrients and heat. This is one way we can reduce the impact of climate change and shift the economy as we know it into new models, structures and meaningfulness."

David Newman, president of the WBA, said: "The time to fight climate change is now. There is no time left to talk, as we are set to lock in emissions for a 2°C temperature rise over the next five years. Cities have a fundamental role to play and a brilliant opportunity to seize in cutting emissions as over half the world's population now lives in urban areas.

"Treating inedible food waste represents an opportunity to cut emissions while resolving other issues around energy, soil quality, waste management and human health in urban areas. The technologies to resolve all these (particularly AD) are mature and deployable now, and the WBA can support cities in their transition."

The report can be found here.