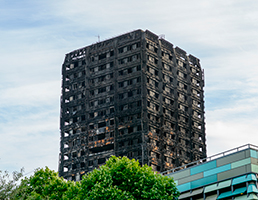 The government says it will consult on banning the combustible cladding that caused the fire at Grenfell Tower to spread so rapidly, leading to the loss of at least 72 lives.

In a statement to Parliament housing secretary Rt Hon James Brokenshire MP said the government was "consulting on significantly restricting or banning the use of "desktop studies" to assess cladding systems".

He said: "Inappropriate use of desktop studies is unacceptable and I will not hesitate to ban them if the consultation - which closes on 25 May - does not demonstrate that they can be used safely.

"Secondly, we are working with industry to clarify Building Regulations fire safety guidance, and I will publish this for consultation in July.

"Let me be clear, the cladding believed to be on Grenfell Tower was unlawful under existing building regulations. It should not have been used.

"I will ensure that there is no room for doubt over what materials can be used safely in cladding of high-rise residential buildings.

"Having listened carefully to concerns, the government will consult on banning the use of combustible materials in cladding systems on high-rise residential buildings.

"Thirdly, we will work with the industry to make the wider suite of building regulations guidance more user-friendly."

The government also announced this week that it will fully fund the removal and replacement of potentially dangerous cladding by social landlords with costs estimated at £400 million.

The association welcomed the findings of the independent Review of Building Regulations and Fire Safety chaired by Dame Judith in the wake of the Grenfell Tower fire. It said the committee had made the right call by highlighting the sector's "systemic problems" rather than focusing on one specific technical aspect.

BESA chief executive David Frise, added: "The review has identified systemic failings in the way construction projects are designed, delivered and managed. "We now need to move forward with building regulations that focus on the whole life cycle of buildings and have a tighter focus on competence and compliance.

"Dame Judith's team spotted right at the start that it was not the building regulations themselves, but how they were applied and enforced that allowed a culture to develop, which led to the Grenfell tragedy. Banning cladding would not move that issue forward - it was the way in which the refurbishment of the tower was managed and delivered as a whole that should face scrutiny."