Employers are failing to capitalise on apprentice recruitment, says Redrow 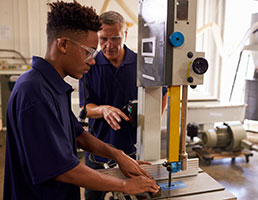 Redrow, one of the UK's biggest housebuilders, says employers in other sectors are failing to take advantage of the pool of untapped young talent.

The latest apprenticeship starts data published by the Department for Education has revealed a 40 per cent drop in apprenticeships starts in February compared with the same period in 2017.

Karen Jones, group HR director at housebuilder Redrow, said: "The government's effort to boost apprenticeship uptake via the Apprenticeship Levy is commendable and whilst we need some time to understand its full impact, it appears that employers aren't fully capitalising on the opportunity to take on apprentices.

"It is important for employers and Parliament to iron out their differences if the levy it is to work effectively across all sectors. Construction is, however, bucking the trend, with apprenticeship starts rising by 49 per cent between 2012 and 2017 according to figures released recently by the Construction Industry Training Board."

Jones added that apprenticeship uptake, particularly among lower-income, disadvantaged backgrounds where there is a pool of untapped talent "could be boosted if the first-year starting wage for an apprentice is raised in line with the National Minimum Wage".

She said: "We must also remain mindful that the UK needs a highly skilled workforce so ensuring that we are getting the right kinds of people into the right kinds of jobs where need is most critical is of paramount importance. The government recently explained that despite a drop in apprenticeship starts, more high-quality apprenticeships are now in place and that it 'won't sacrifice that quality just to meet the target that was set'".

Jones said a way to develop "high-calibre talent is to review how apprenticeships are taught and the grades they need to pass the qualification. Our recent apprenticeships research discovered that many apprentices struggle to secure at least an equivalent C grade at GCSE maths and English, which has to be achieved as part of an apprenticeship programme. This is leading to a high number of apprentices who fail to complete their qualification and is often down to the restrictive way in which these two academic subjects have to be delivered.  Equipping individuals with applied skills rather than theoretical ones will help to ensure that the UK workforce is highly skilled to support long-term growth".