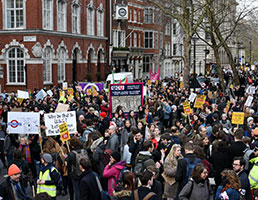 The University of London's central administration says it will work closely with the recognised trade unions and current contractors to transition facilities management staff into the university after a review of contracted services in November 2017.

In a cautiously worded statement from the University of London, it said that the board of trustees for the institution met on 23 May and considered the report and recommendation from the review group.

According to the statement, the university says it will develop "an efficient provision model in which in-house services are supported by contracts designed to provide both the specialist expertise and the flexibility to respond to the varying needs of the university".

The board raised "significant concerns over the additional costs of bringing services in-house" and on its academic agenda.

The board was content to support the review group's recommendations "contingent on seeing more detailed plans and costs, which would deliver benefits to both staff and the university, together with plans for mitigating the impact on academic activities and student facing services".

The board said it would like the university's management to expedite the process to reduce the risk of further industrial actions as far as possible and ensure that the university is not distracted or hindered from furthering its core academic mission.

The university said: "The decision will mean a significant financial investment which will be linked to key strategic initiatives: ensuring security and compliance at Senate House and across our estate following heightened security risks; ensuring Senate House offers a high-quality experience for staff, academic activity and events; the development of an effective Residential Student Life programme, recognising that we need to enhance and broaden our pastoral care for residents in halls."

It added: "In practical terms, these initiatives will be progressed over the next 12-18 months with some services being brought in-house in 2018/19 where there is an opportunity and clear rationale for doing this, although the process be phased in over subsequent years.

The Independent Workers' Union of Great Britain (IWGB) said the decision was "a major concession" to its "Back in-house" campaign that it launched in September 2017.

The university's decision follows the biggest strike of outsourced workers in UK-higher education history, when more than 100 workers walked out on 25 and 26 April, according to IWGB.

But the IWGB said "the vagueness of the statement and the lack of clarity on both the timeline and on which contracts will be brought in house means the IWGB will go ahead with the strike of around 130 outsourced cleaners, security officers, receptionists, porters, post room workers and audiovisual workers, scheduled for 6 June".

The union added: "The university today announced a vague commitment to bring some services in house in 2018/19 "where there is an opportunity and clear rationale", without specifying which services. The lack of detail on which contracts will be brought in-house and when, as well as the number of caveats in its statement gives no assurance to any of the outsourced workers as to if and when they will be made direct employees.

"Prior to the decision the IWGB said it would consider any process to bring the outsourced workers back in house that would take 12 months or less. Given that outsourced workers terms and conditions have been a live issue for the past seven years, anything longer than 12 months is excessive."

The IWGB also plans to continue its landmark "joint-employer" case against the University of London for the time being.

IWGB general-secretary Dr Jason Moyer-Lee said: "Today's announcement demonstrates that collective action and pressure works. The university has clearly understood the current situation is untenable and that they need to do something. But it also shows that the University will always try and squeeze every last penny out of its outsourced staff. Until the University of London announces the termination of all outsourcing on a reasonable timescale, IWGB will continue to campaign."