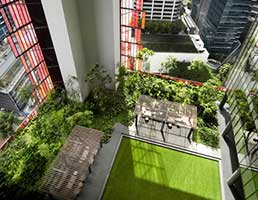 The Oasia Hotel Downtown in Singapore has been named Best Tall Building Worldwide. Judges from the Council on Tall Buildings and Urban Habitat (CTBUH) announced the award at its Tall and Urban Innovation Conference in Chicago.

The facade of the 60-storey Oasia is covered with 54 species of red and green climbing plants. Antony Wood, executive director at CTBUH, said the tower also impressed by "giving 40 percent of its volume to open air communal terraces in the sky".

Other award recipients included the World Trade Center Master Plan for urban habitat, MULTI for innovation and the EY Centre for construction. 'Ten-year' awards were given to the New York Times Tower for 2007 completions and Shanghai World Financial Center for 2008 completions.

The CTBUH determined that The Silo, a former grain container in the industrial Nordhavn area of Copenhagen converted into a contemporary residential high-rise, was 2018's best tall building in Europe.

With its awards programme, the CTBUH says its aim is to give independent reviews of building projects worldwide and advocate for improvements in their performance. Winners were chosen from a group of 48 finalists representing 28 countries.

The full list of winners can be accessed here: