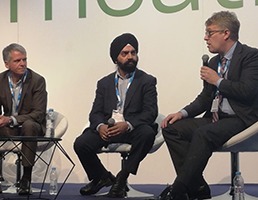 Drones are set to fly through the UK's sewers hunting down fatbergs so human workers don't have to, explained Karl Simmons, head of health and safety, security and well-being at Thames Water Utilities.

Simmons was hosting the technology debate entitled 'How drones, virtual reality and technology will influence health and safety reduction strategies' at the first day of the Safety & Health Expo at London Excel.

On the stage with him were panellists Dylan Roberts, health, safety and well-being director at Skanska, Harvinder Bhatia, head of central engineering at Transport for London (TfL), and Sean Elson, partner at legal firm Pinsent Masons.

The organisation invested in five drones - each costing around £30,000 - which replaces the need and cost of scaffolding for inspection as well as reducing safety risks to staff.

For Roberts, the power of drones is that they offer a "bird's eye view" of a worksite, which helps to determine whether its setup has been optimised and how it can be improved in terms of efficiency and workers' safety.

TfL has also been using drones, reported Bhatia, sending them to the rooftops of old train depots. This was a clear benefit to savings in time and money and reduction of risks to workers.

The discussion, which ranged from BIM to virtual reality (VR) and augmented reality(AR), and from drones to well-being, was held together by the core imperative of technology being used to keep workers and users of facilities safe and engaged, while also increasing efficiency.

TfL has kitted out the bottoms of trains with cameras that record constant footage of the train tracks while the train is in motion. This footage is compared with the database of what tracks should look like and the software then identifies when and where maintenance is required on the tracks.

Not too long ago, Simmons reminded the audience, railway maintenance workers would walk the lines performing inspections, which was a dark, damp and potentially risky way of doing things.

Bhatia explained how TfL is also using VR to train its staff in train maintenance. The manufacturers of TfL's new trains provide vital information to help build the VR experience. Once engaged in the virtual world, the staff can be taught what to look for and how to fix it.

There are gains in efficiency, but Bhatia said staff are safer and more confident when the real work arrives. VR is also being applied to station builds or renovations, said Bhatia, with evacuation and high-risk areas showed to staff.

An audience member asked about augmented reality and how valuable it was. Roberts said it could be useful for maintenance and repairs on a pump, for example, by providing all the manufacturing information and maintenance manuals in an augmented overlay.

But Roberts cautioned that too much information sent to workers on site could be dangerous and distract them from the task at hand.

From the audience, Roberts was asked what he considered were the main barriers to the widespread adoption of technology in the workplace.

He said there was lingering fear of the unknown as tech's developments happen so quickly, as well as a pervasive "myth" that tech is too costly. He cited how major design houses' use of BIM was commonplace yet the construction industry, for example, is still debating its merits.