Brit workers lie over true reason for taking a sickie 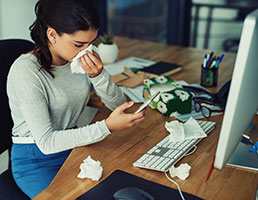 New research has revealed that 34 per cent of Brits have lied over the true reason they are taking time off work when unwell, for fear of stigma in the workplace.

A new survey of 1,000 UK adults by charity Crohn's and Colitis UK found that employees frequently pick a 'one-off' or short-term health complaint when calling in sick, instead of telling the truth about recurring problems.

The research shows that long-term health conditions are deemed the 'least valid' reasons for not attending work, despite their often devastating symptoms.

Only 15 per cent of people said that Crohn's disease and ulcerative colitis were acceptable reasons to call in sick. Other often invisible long-term conditions, such as depression, anxiety, and fatigue scored even lower.

When asked for the most 'legitimate' reason for taking a sick day, the British public's top three answers were short-term illnesses: vomiting (43 per cent), flu (36 per cent) and food poisoning (33 per cent).

When calling in sick, Brits cover up the real reason for their illness for fear of judgement from colleagues (32 per cent) and feel anxious (37 per cent), stressed (28 per cent) and doubted (22 per cent) when having to take time off work.

For those with a long-term health condition, over half of respondents feel they have to downplay their condition at work, because they believe they will experience stigma in the workplace and that it will affect their careers.

The findings are supported by Crohn's and Colitis UK's 2018 Quality of Life survey, which shows that 44 per cent of people living with Crohn's or ulcerative colitis in the UK today agree that their long-term health condition has affected their careers.

Crohn's and Colitis UK's study also found that just under one in five workers feel 'frustrated' towards colleagues who are frequently off sick, and 6 per cent feel 'angry' towards these colleagues.

London (Greater)
Up to £47,276 per annum plus excellent benefits
Reference
59097
END_OF_DOCUMENT_TOKEN_TO_BE_REPLACED