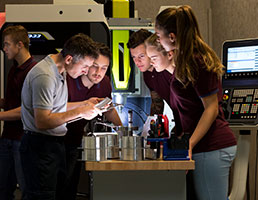 Business-Analysis: The pursuit of expertise

Sixty-eight per cent of young people are unsure of what an apprenticeship is, according to research by facilities management provider ABM.

And 36 per cent of parents of children aged 11 to 16 were also unaware of the apprenticeship pathway into a career.

ABM says this is "signalling a wider awareness problem which is impacting career choices and creating a skills gaps in key industries".

The research follows news of the T-levels programme and the Apprentice Levy - which aim to present young people with more choices in educational pathways.

At the same time, reports from the UK government show a decline in new apprentices for March 2018, which are down 28 per cent compared with the same period a year ago.

When asked who or what influences career decisions, young people said their mother and father together were number one (66 per cent), followed by teachers and school (41 per cent), the lessons children enjoy (31 per cent) and then friends (14 per cent).

Further findings revealed that for those parents who knew what an apprenticeship was, just 14 per cent considered it to be a good option, with three times as many parents (42 per cent) saying that they wanted their children to attend university, despite crippling tuition fees and the prospect of long-term debt.

The top reasons given for not encouraging their child to undertake an apprenticeship were that they were thought to be poorly paid (43 per cent), because they see it as a last resort for those who fail their exams (37 per cent), and that apprenticeships don't lead to successful careers (17 per cent).

The engineering and facilities management industries are particularly disadvantaged by the awareness gap: 60 per cent of young people said that they were unlikely to even consider working in engineering or FM, with over a third (39 per cent) saying that they wouldn't consider working in this area because they didn't know anything about it. When asked, just a quarter of parents said they would encourage their children to consider careers in these areas.

Adam Baker, director of ABM UK, said: "We were shocked to find a genuine lack of knowledge on apprenticeships amongst parents, and that many still consider them to be a last resort for children who fail their exams. It shows a need for a more unified approach and a better way of communicating, especially with parents, whose influence alongside teachers is critical.

"When a young person is set to choose a university there's a huge amount of support from schools, parents and educational bodies such as UCAS. We need similar representation for apprenticeships and technical careers to ensure young people in the UK don't miss out on enriching, lucrative and credible career options. It's vital we give parents and schools more information and empower them to show children all the options open to them."

Dr Anne-Marie Imafido, co-founder and CEO of Stemettes, a social enterprise that encourages girls aged between 5-22 years old to pursue careers in science, technology, engineering and maths, said: "The report told us that just 16 per cent of young people considered technical roles to be 'for boys', but we know that 89 per cent of the UK's current engineering workforce is male. That means that for 84 per cent of young people, a gender barrier has been crossed and that engineering and facilities management is well positioned to set the standard for better balance in the future. To make this happen we need to leverage the influence that parents and teachers have by giving them the right information."

ABM UK commissioned the research as part of its "ongoing commitment to attract new talent to the engineering and facilities management industry". In January it also added 36 West London schoolchildren into the pilot of its first Junior Engineering Engagement Programme (J.E.E.P), which FM World reported on last year.