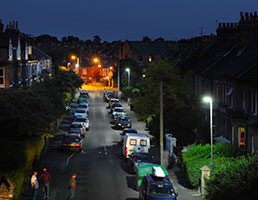 This follows last November's announcement that Amey is installing 56,000 new LED luminaires to street lights in Manchester in a three-year contract for Manchester City Council.

Amey is the first organisation to adopt large-scale LED street lighting (on the Birmingham highways management and maintenance PFI contract) and has so far installed at least 200,000 LED lights across the UK.

Council transport convener Councillor Lesley Macinnes said: "When we rolled out these energy-efficient lights as a pilot project in 2014, they were very well received by local residents, who told us they preferred the crisper, brighter light to the orangey glow of the old, inefficient street lights. We are now planning to roll out energy-efficient street lights to communities right across Edinburgh in a programme that will last until the end of 2020."

In addition to delivering significant energy reductions, this work will help the council to save £54 million over 20 years. Replacing the old inefficient lanterns will also help the city reduce CO2 emissions to comply with Scottish Government energy-efficiency legislation.

The Inverclyde Council contract will see Amey maintain more than 13,000 street lights, 1,000 traffic sign lights and 600 items of ancillary electrical equipment in a deal worth over £660,000. Amey has managed Inverclyde's lighting maintenance service since its first contract in January 2014.

This renewed contract builds on the success of its work to maintain the council's lighting infrastructure and replace existing street lights with new LED lanterns.