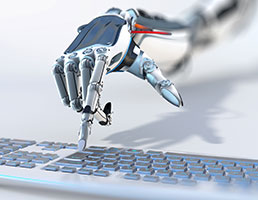 Thirty per cent of male workers believe that artificial intelligence will disrupt their role within the next two years.

This compares with 25 per cent of women.

A survey of 500 full-time and 500 part-time workers was conducted by research organisation OnePoll on behalf of Investors in People between Wednesday 4th and Monday 9th July.

It sought to collect information about the perceptions and attitudes held by workers toward artificial intelligence and its potential impacts on the workplace.

Thirty-seven per cent of female workers felt their manager lacked the skills required to integrate artificial intelligence into their team compared with 43 per cent of male workers. Workers who felt this way were mostly in the energy and utilities sector (82 per cent) followed by 61 per cent in engineering and manufacturing and 38 per cent in healthcare and 25 per cent in marketing, PR and communications.

Less than a quarter of workers (24 per cent) felt that their organisation communicates well when new artificial intelligence is introduced.

Only a third of UK workers are confident that their employer would retrain them if AI were to replace their role - with 64 per cent in the creative arts stating this and 59 per cent in energy and utilities, and 53 per cent in engineering and manufacturing.