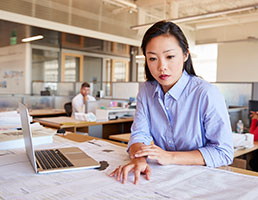 Open-plan offices do not necessarily lead to better collaboration, according to a study published in the journal Philosophical Transactions of the Royal Society B.

The Impact of the 'Open' Workspace on Human Collaboration by two Harvard Business School academics, Ethan S Bernstein and Stephen Turban, is the first study to "empirically measure both face-to-face and electronic interaction before and after the adoption of open office architecture".

Contrary to common belief the volume of face-to-face interaction decreased significantly (about 70 per cent) in both cases, with an associated increase in electronic interaction, state Bernstein and Turban.

The researchers say that rather than prompting "increasingly vibrant face-to-face collaboration, open architecture appeared to trigger a natural human response to socially withdraw from officemates and interact instead over email and IM".

They added: "The results inform our understanding of the impact on human behaviour of workspaces that trend towards fewer spatial boundaries."

Details of the study can be found here.