Office space must be changed for next stages of business growth 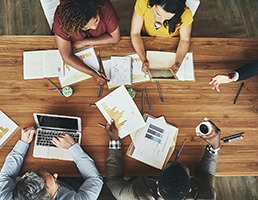 SMEs could fall behind if their office space is not geared up for the next stages of growth, according to research by Crown Workspace.

A survey conducted with 500 SME business leaders from across Britain found that although they know what they need from their office space for the next stage of growth, they require support in their pursuit of this. The findings go on to identify the barriers preventing firms from obtaining the optimum workspace - and what business leaders are least willing to compromise to get it.

Highlights from the research include:

What SMEs need from office design to support growth

 More than a quarter (28 per cent) need their office to provide more areas for quieter working and confidential matters.

 Just over a quarter (26 per cent) require open and flexible space.

 A fifth (21 per cent) requests energy-efficient measures, such as LED lighting, their own heat and power source.

The barriers preventing SMEs from obtaining the optimum working environment

 The cost of rent is a barrier to more than a third (38 per cent) of business owners.

 Not having enough space is a barrier to a third (33 per cent).

 Length of tenancy and the lack of available suitable office space is a barrier to more than a fifth (22 per cent).

 The inflexibility of their landlord is a barrier to just under a fifth (19 per cent).

With office space at a premium in many locations across Britain, compromise is part and parcel of securing a workplace. However, there are aspects that business owners are least likely to compromise on to secure the best office for their organisation.

Unsurprisingly, how people get to work and how much premises cost are still top of the list of concerns for most organisations. The research found that organisations are least willing to compromise on the following items.

 25 per cent stated the cost of rent/mortgage

 21 per cent stated location and commuting time to work.

 9 per cent stated the provision of bike sheds.

Simon Gammell, director of Crown Workspace, said: "Landlords need to be more open to occupiers adapting their workplace to suit the changing needs of their business and the changing landscape of how we work in a highly technological world."