AI to be commonplace in business within 10 years, say a third of firms 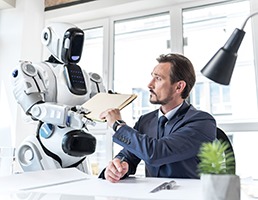 Approximately one in three companies (32 per cent) believe that business use of artificial intelligence (AI) will be commonplace within the next decade, according to research from TomTom Telematics.

Its study found that 22 per cent believe that virtual reality will be in wide use, while around one in five anticipates the prevalence of in-vehicle working owing to the development of autonomous vehicles.

But almost a third of companies (32 per cent) fear they may struggle to keep pace with the rate of technological change.

Moreover, about one in two (49 per cent) believe those that fail to embrace digitalised processes and the Internet of Things are at greater risk of going out of business.

Beverley Wise, director UK & Ireland at TomTom Telematics, said: "Companies should be mindful of the pace of change and keep a close eye on the solutions and processes that will help ensure a competitive future - from smart mobility and connected tech to advanced manufacturing and design systems. Many of today's new emerging technologies will disrupt and revolutionise commerce, and in the process become the standard for tomorrow."

Almost half of companies (46 per cent) believe that remote working has or will become the norm within the next 10 years. Remote working is currently proving more prevalent among larger companies (58 per cent) than their SME counterparts (37 per cent).

Wise added: "The onus is on businesses, both large and small, to adapt to this new era of hypermobility and connected working that is being ushered in by advancements in areas ranging from telematics and the connected car to iPaaS and blockchain solutions."

London (Greater)
Up to £47,276 per annum plus excellent benefits
Reference
59097
END_OF_DOCUMENT_TOKEN_TO_BE_REPLACED