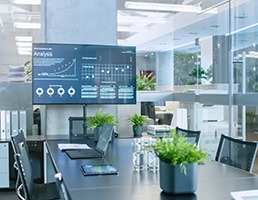 Failure to switch off electrical equipment when it is not in use is needlessly costing companies thousands of pounds each year.

Office computers are left unattended for at least two hours every day because of breaks, meetings and lunches. During this time, each PC uses around 200 watts -0.2 kilowatts - of electricity, at an expense of 1.5p an hour.

And while that might seem insignificant, calculated for a workforce of 100 it amounts to £15 of unused power each five-day weekand a yearly total of nearly £700.

But it isn't just PCs that send the bills soaring - lights are a major culprit too. A hundred light bulbs left on unnecessarily for two hours a day could cost £471.12 in wasted energy a year.

According to the Energy Saving Trust, the UK squanders £170 million a year simply by leaving lights on in empty rooms. Failing to switch off office lights overnight consumes enough energy in one year to heat a home for five months.

Further statistics from the trust show that leaving devices such as TVs, laptops, printers and cordless phones on standby can add £30 to an average annual household bill. Apply this to the number of appliances found in the average office and the figure increases significantly.

A University of Cambridge study revealed that photocopiers switched on all day but used for only 20 per cent of that time account for £320 in wasted electricity each year. A photocopier left powered up overnight will go through enough energy to produce more than 1,500 copies.

Switching off and unplugging appliances at the socket is the only foolproof way to stop them consuming electricity. And the best way to facilitate this is to provide sockets that employees can access easily and see where their devices are plugged in.

Bruce Catrill, marketing manager at power module suppliers CMD said: "Generally people won't remove a plug from its socket in the fear of inadvertently unplugging the wrong device. Providing on-desk plug sockets for employees not only serves as a visual reminder to disconnect electrical items when they're not in use, but also takes the guesswork out of what lead is connected to what device. Using energy management devices at workstations will also help employers save money by monitoring exactly how much energy is being used - and wasted - on a daily basis."