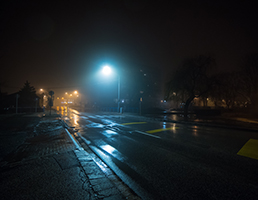 The UK street lighting market has seen "steady growth in recent years, driven by substantial LED replacement programmes run by local authorities over the past five years or so", according to a report by AMA Research.

By 2022, expenditure on street lighting is forecast to reach £336 million, up by 17 per cent compared with present levels.

The share of the market taken by new projects is expected to increase, as more local authorities replace outdated lighting systems with LEDs.

With costs for non-energy efficient lighting increasing rapidly, more local authorities have been adopting LED systems offering 100,000 hours of light, compared with 15,000 for traditional bulbs. It has been suggested that local authorities could cut their energy expenditure by around £100m a year by switching to LED street lights.

As well as being more economical in energy terms, these new products also have longer lifespans and therefore will require a lower long-term spend on replacements. Although many councils have already switched to LED, there remains a significant proportion of old-style, lower-value lighting that is over 40 years old and in need of replacement and conversion.

By 2014 only 10 per cent of councils had switched to using low-energy lighting and estimates suggest that in 2017 around 25 per cent of lighting columns were in the process of being upgraded by local authorities. It is estimated that maintenance accounts for a significant share of the market.

Within the new projects/replacement equipment category much of future spending is likely to focus on new areas of energy efficiency, although in the long term the value of maintenance is expected to decrease owing to the reduced replacement lead times and the lowering of product prices as LED lighting penetration grows.

Once these new systems are in place, expenditure on new projects is expected to stabilise, leading to growth rates of around 1-2 per cent a year towards the end of the forecast period, according to the market research.