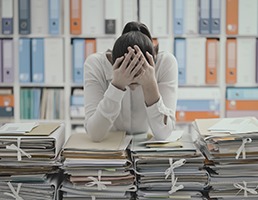 According to a global survey, nearly half (45 per cent) of full-time workers say it should take less than five hours each day to do their job if they worked uninterrupted, while three out of four employees (72 per cent) would work four days or less a week if pay remained constant.

Seventy-two per cent of workers say they would work four days or less a week if pay remained constant.

The Workforce Institute at Kronos Incorporated conducted a survey of nearly 3,000 employees across eight countries. It revealed that even though 75 per cent of full-time employees globally say that they have enough time in the workday to finish their major tasks, nearly two in five (37 per cent) work more than 40 hours each week and 71 per cent claim work interferes with their personal lives.

Full-time employees in the UK are the second strongest (34 per cent) to feel that they do not have enough time in the day to get the job done, yet they do not work the most hours.

But full-time workers in the UK also desire a three-day workweek the most (26 per cent), and the UK is one of the least content (16 per cent) with the standard five-day working week. A third of employees (35 per cent) would take a 20 per cent pay-cut to work one day less a week.

If given more time in the workday, one in four workers (28 per cent of individual contributors; 24 per cent of people managers) would simply catch up on their work.

If pay remained constant, a third of global workers say their ideal working week would last four days (34 per cent), while 20 per cent said they would work three days a week. One in four global employees (28 per cent) are content with the standard five-day workweek.

Dan Schawbel, author and research director, Future Workplace, said: "Employees are working harder than ever and at the cost of their personal lives. This study confirms that we can all be more efficient with our workday, that there's an opportunity to remove administrative tasks in exchange for more impactful ones, and that the traditional workweek isn't as relevant in today's business world. Employees need more flexibility with how, when, and where they work, and leaders should be supportive of an employee's professional and personal life. When employees get time to rest, they become more productive, creative, and are healthier, meaning they take fewer sick days."

Joyce Maroney, executive director, The Workforce Institute at Kronos, said that "organisations must help their people eliminate distractions, inefficiencies, and administrative work to enable them to work at full capacity. This will create more time to innovate, collaborate, develop skills and relationships, and serve customers while opening the door to creative scheduling options, including the coveted four-day workweek".

London (Greater)
Up to £47,276 per annum plus excellent benefits
Reference
59097
END_OF_DOCUMENT_TOKEN_TO_BE_REPLACED