Fire door safety is being ignored despite Grenfell tragedy 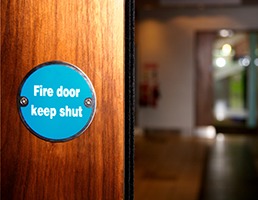 Half of tradespeople do not feel confident about advising customers on fire door safety, according to an online poll carried out by online trade supplier IronmongeryDirect and supported by the Fire Industry Association.

The survey results have been published in the wake of Fire Door Safety Week (held 24-30 September) to raise awareness of the importance of fire doors in saving lives.

Fire doors are designed to withstand fire for between 30 and 240 minutes and can make a significant difference in saving lives and protecting buildings.

The research found that despite extensive media coverage about the dangers of inadequate fire protection in offices and homes since the Grenfell tragedy last summer, less than 20 per cent of tradespeople polled had seen an increase in demand for fire safety products or parts such as replacement intumescent strips for fire doors.

This poll followed a national survey of 2,000 people by IronmongerDirect last year, which it said illustrated an alarming lack of general public awareness of the life-saving role of fire doors, which are a legal requirement in all commercial, public and multi-occupancy buildings.

It found that 70 per cent of respondents would not know who to contact if they noticed a problem with a fire door. Almost one in two people surveyed say they do not know how to identify a fire door.

Also, 34 per cent of people say they would prop a fire door open to let in fresh air or give easier access, among other reasons.

Fire Industry Association chief executive Ian Moore said that fire doors were one of many essential elements to keeping people safe from fire.

"In all cases, a suitable and sufficient fire risk assessment should be carried out by the responsible person - usually the building owner," he said. "A fire risk assessment should determine, through thorough inspection, any potential risks or hazards so that they may be resolved.  If you are worried about hazards and risks from fire, you can always contact us, the Fire Industry Association, for free and impartial information and we will be able to direct you to an expert on the subject."

Wayne Lysaght-Mason, managing director of IronmongeryDirect, said: "We are now over a year on from the Grenfell Tower fire and it is disturbing that a significant proportion of the general public appear to lack basic fire door knowledge."

London (Greater)
Up to £47,276 per annum plus excellent benefits
Reference
59097
END_OF_DOCUMENT_TOKEN_TO_BE_REPLACED