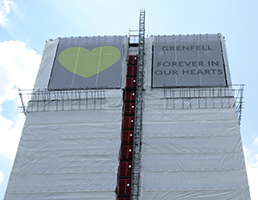 The Association for Specialist Fire Protection (ASFP) has announced that the Royal Institute of British Architects (RIBA) has launched a consultation on a new RIBA Plan of Work for Fire Safety.

In 2016 the ASFP convened a panel of stakeholders from across the built environment to investigate how fire protection could be improved throughout the construction cycle.

The RIBA Plan of Work ensures that there is a detailed specification for fire protection at the design stage and a schedule for fire throughout the construction process. The Plan of Works includes sign-offs as construction progresses with all data reaching the end-user to support adequate fire-risk management.

It also reflects recommendations by the Hackitt Review in light of the Grenfell Tower tragedy, which call for a greater focus on the roles and responsibilities and a 'golden thread' during a building's life cycle. The review also recommended the introduction of mandatory sign-off procedures at the key 'gateway points' of planning permission, permission to build, and permission to occupy.

"The ASFP welcomes the launch of this important consultation which represents a vital step forward in improving the safety of our built environment, says Niall Rowan, CEO of the ASFP. "We have long called for fire to be considered much earlier in the construction process and this new document clearly sets out the requirements and responsibilities at each stage of the process, from the original design and throughout the life of the building, including changes and refurbishments later in the building's life. We hope that the document will gain strong support and recognition."

The draft RIBA Plan of Work for Fire Safety is open for consultation until 11 October.

The BIFM is also still working on building safety measures from an FM perspective arising from the Hackitt Review, Building a Safer Future, having shared its recommendations with the review team through the review's occupation and maintenance working group and the sub-working group on competence.

Following the Dame Judith's recommendations, presented in summer to the Housing, Communities and Local Government Select Committee, the government says it is due to set out an implementation plan later this month, giving more details on how it is responding to her independent report.

Sofie Hooper, the BIFM's senior policy adviser, told FM World: "It is our understanding that within the next or so a statement will be made by the housing secretary James Brokenshire on the direction of travel for legislation and the timeline for actually implementing it.

"Members of the Life Safety Working Group (LSWG) have been in discussions with the working group set up in response to Hackitt to develop a competency framework for people working in high-risk residential buildings. Some of that will obviously need to be put into primary and secondary legislation by the government."

She said the LSWG had submitted its response and expected it to be involved with the other stakeholders in a lot of in-depth work on aiding the creation of the framework, possibly until next March.

BIFM is also providing the secretariat for WG 8- competency for the Building Safety Manager while participating in other competency working groups.

The institute has already identified four key problem areas about fire safety in all buildings that are essential to address and strengthen fire - and wider life - safety when managing buildings. These are:

1. The standard of fire risk assessments carried out is often very poor and often lacks a suitable remedial plan.

2. The Responsible Person role (The Regulatory Reform (Fire Safety) Order 2005) is not well defined and consequently, the responsible person often lacks an understanding of the role, as well as the importance of fire risk assessments and how they should be followed up.  This reflects badly on standards of competency and has been enabled by a lack of enforcement of the requirements in place.

3. A building's documentation is often poor, incomplete and dispersed.

There is a general lack of enforcement of compliance across the board.

 Brokenshire is due to announce the promised ban on the use of combustible cladding on all new residential buildings above 18 metres at to at the Conservative Party conference today. The measure will also apply to schools, care homes, student accommodation and hospitals.