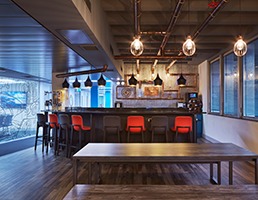 Rhino Interiors Group, which has offices in Coventry and Birmingham, has acquired Derby-based Three Hundred & Sixty Degrees as part of its rapid expansion plan.

The Midlands-based workspace interiors firm has bought its local competitor to "consolidate its standing in the region and strengthen its creative offering".

Yesterday (3 October) the Three Hundred & Sixty Degrees (360) team was due to join forces with Rhino, which assumes ownership of the brand and its assets. The business, which started up in 2003, will become part of the fast-expanding Rhino Interiors Group, with founder and former managing director Howard Barnes joining Rhino to head its workplace design arm.

Rhino, which has been in business for 40 years, delivers a turnkey solution for office interiors, which includes workspace consultancy, design, fit-out and furniture.

The group, which has 30 staff, has grown significantly over the past two years. In February, it opened an office on Birmingham's Colmore Row. Over the past 12 months, it has increased turnover by 50 per cent.

Ben Wheatcroft, managing director, said the acquisition puts Rhino in a strong position to compete on a national scale, while servicing clients more creatively, with "an all-round richer and more polished experience".

"The opportunity to acquire 360 was a no-brainer for us," he added. "It is a well-known name in the regional office fit-out market with very complementary skill sets and customer profiles.

"It is an opportunity to add the flair and creativity that 360 are renowned for, backed by the strong delivery capabilities of Rhino, which we believe will further support our ability to deliver inspirational office design and fit-outs across the UK.

"Being centrally based, we have the ability to service the whole of the country. This is more of a move to strengthen our design capabilities for the future and will allow us to compete at a much greater level than we have been able to before."