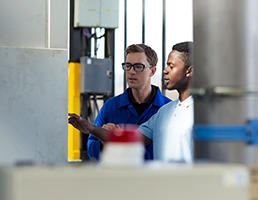 The BIFM has broadly welcomed chancellor Philip Hammond's announcement this week of plans for changes to the apprenticeship levy system, expressing hopes that a further review would lead to a more flexible system.

But if apprenticeships are to play a significant role part in plugging growing the skills gap, warned Linda Hausmanis, chief executive of the BIFM, it must look at the restrictive 'double whammy' implicit in the way the bands are currently funded.

In his speech to the Conservative party conference in Birmingham, Hammond announced a £125 million funding package to enable large employers to transfer up to 25 per cent of their levy pots to smaller supply chain partners from next April. This would constitute a notable step up from the 10 per cent that was instituted in July.

Hausmanis commented: "The chancellor's announcement will be welcomed by those businesses wanting to support their SME supply chain, but the fact is that the levy is underused while the FM skills gap continues to widen, including at senior levels. Apprenticeships are an essential part of the solution to plug this gap but the real barrier to take up is the way bands are allocated and funded.

"Firms in my sector, whose levy contributions have resourced the development of FM apprenticeship standards are baffled that they remain beyond reach because funding bands are too low for providers to deliver quality programmes, leading to the pitiful scenario of a degree apprenticeship with no uptake, despite demand. It's a double whammy because strict levy rules prevent them from funding alternatives.

"So BIFM would like to see two changes; firstly, an uplift in the funding bands allocated to the FM apprenticeship to align it with equivalent academic degrees and stimulate uptake; secondly, a relaxation in levy rules so it may be drawn on for training formats additional to apprenticeships, and the sector and UK plc can develop the quality FMs it needs."

Only around 2 per cent of employers actually pay into the levy, but many businesses have struggled to find apprenticeship programmes that are eligible for levy spending.

Currently, any company or public sector body with a salary bill exceeding £3 million must pay the levy, which many regard as a 0.5 per cent tax on payroll. The company then claims vouchers from the government to spend on courses for their apprentices.

The government has an avowed target to create three million apprenticeships by 2020 in the public and private sectors as part of efforts to boost the UK's poor productivity record. Corporate lobby groups have suggested that this goal is unattainable and the government has been facing mounting pressure from the business community, who regard the levy system as too inflexible.


Hammond described the planned changes as a measure to "engage with business on our plans for the long-term operation of the levy, working hand-in-hand with employers to ensure that every young person can fulfil their potential and achieve their dreams". He added that the government also wishes to widen the range of apprenticeship courses available by increasing the number of people who can access STEM subjects - science, technology, engineering and mathematics.