Built environment sector 'must lead the charge against climate change' 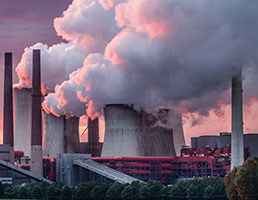 Limiting global warming to 1.5°C would require "rapid, far-reaching and unprecedented changes in all aspects of society", according to a report by the Intergovernmental Panel on Climate Change (IPCC).

The move could go "hand in hand with ensuring a more sustainable and equitable society", added the body.

The Special Report on Global Warming of 1.5°C was approved by the IPCC on Saturday in Incheon, Republic of Korea. It will be a key scientific input into the Katowice Climate Change Conference in Poland in December when governments review the Paris Agreement to tackle climate change.

"With more than 6,000 scientific references cited and the dedicated contribution of thousands of expert and government reviewers worldwide, this important report testifies to the breadth and policy relevance of the IPCC," said Hoesung Lee, chair of the IPCC.

Ninety-one authors and review editors from 40 countries prepared the IPCC report in response to an invitation from the United Nations Framework Convention on Climate Change (UNFCCC) when it adopted the Paris Agreement in 2015.

Julie Hirigoyen, chief executive at UKGBC, said: "This report from the IPCC is a wake-up call for governments and businesses across the globe. One of the goals of the international 2015 COP21 climate deal was to limit the temperature increase to 1.5°C above pre-industrial levels, recognising that this would significantly reduce the risks and impacts of climate change.

"This latest IPCC report points to the urgency and scale of action required to achieve this, which should be keenly reviewed by every single board room. There is no doubt that business leaders need to make bold decisions today to transition to a low/no-carbon economy that can sustain future generations.

"The construction and property industry in the UK is an economic juggernaut, and our buildings account for approximately 30 per cent of carbon emissions. It is also the industry with the most cost-effective means of reducing carbon emissions so it will be a vital catalyst for change in the wider economy. At UKGBC we know that built environment businesses can, and must, lead the charge against climate change."

Colin Goodwin, technical director, BSRIA, said: "It is clear that unprecedented changes are needed to curb this catastrophic rise in global warming.

"In recent years, the UK government expanded offshore wind power and had become the first developed country to set an end date for the use of coal. There are still clearly huge changes and challenges ahead in the expected energy transition away from fossil fuels and storage of renewable energy.

"As an industry, we collectively need to, not only take action on climate change and stabilise the climate to avoid its worst impacts, but get on track to meet the UK's climate change obligations. The UK's net carbon emissions should be reduced by 60 per cent by 2030 - and to zero by 2050 or at least 80 per cent of 1990 levels by 2050."

Goodwin added: "Future technology in renewables and the move to reduce greenhouse gases and carbon use in the built environment is crucial. BSRIA is committed to supporting the UK government in reducing carbon and, indeed, its position on this. Is now the time to call on government for legislation to go further? Or offer incentives for green and clean technologies?"

London (Greater)
Up to £47,276 per annum plus excellent benefits
Reference
59097
END_OF_DOCUMENT_TOKEN_TO_BE_REPLACED