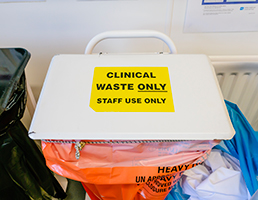 Healthcare Environmental Services, which services the NHS and operates six sites across England, has been found by the Environment Agency (EA) to have broken environmental permits.

The Department of Health and Social Care (DHSC) is leading on the government response while the EA is taking enforcement action against the operator.

An Environment Agency spokesperson said: "The agency has found Healthcare Environmental Services to be in breach of its environmental permits at sites which deal with clinical waste. We are taking enforcement action against the operator, which includes clearance of the excess waste, and have launched a criminal investigation.

"We are supporting the government and the NHS to ensure there is no disruption to public services and for alternative plans to be put in place for hospitals affected to dispose of their waste safely."

The Environment Agency has found that Healthcare Environmental Services breached its environmental permits at four of its six sites dealing with clinical waste by keeping more waste on site than its permit allows and storing waste inappropriately.

As part of its enforcement action, the EA has partially suspended the company's permit at one of its sites.

This will prevent the operator from accepting any more incinerator-only waste so the backlog of waste on-site can be cleared.

The EA is also progressing with enforcement action at the other non-compliant sites.

It is the waste company's responsibility to clear its sites and operate legally.

As the regulator, the EA has set out a timeline for clearance of the waste and are carrying out regular inspections at each of the company's sites to monitor the situation.

The Environment Agency has taken a range of actions for the company to bring its sites back into compliance, but it has repeatedly breached permits and continued to operate unlawfully.