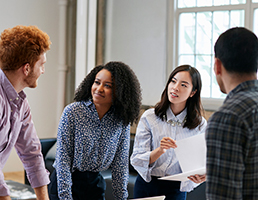 Measures to tackle ethnic disparities in the workplace have been announced by Prime Minister Theresa May - a year after the government published the findings of a world-first Race Disparity Audit on how people of different ethnic backgrounds are treated across society.

Developed jointly by the government and Business in the Community (BITC), the new Race at Work Charter would, said the prime minister, commit businesses to "a bold set of principles and actions designed to drive forward a step change in the recruitment and progression of ethnic minority employees".

The government has named WPP UK country manager and chairwoman of MediaCom UK & Ireland Karen Blackett OBE as its Race at Work Champion and has already secured a number of high-profile inaugural signatories to the charter.

Financial services company Lloyds Banking Group, also a charter signatory, is the first FTSE 100 company to set a goal to increase the representation of ethnic minority employees at senior levels.

Alongside the Race at Work Charter, the prime minister will also set up a consultation on ethnicity pay reporting in response to the Race Disparity Audit's Ethnicity facts and figures website data (www.ethnicity-facts-figures.service.gov.uk), which reveals significant disparities in the pay and progression of ethnic minority employees compared with their white counterparts.

In the first consultation of its kind, the government will invite employers to share their views on a mandatory approach to ethnicity pay reporting because the number of organisations voluntarily publishing information on the pay gap for people from different ethnic backgrounds remains low.

The consultation, open until January, will set out in detail what information employers should publish to allow for decisive action to be taken while also asking employers how ethnicity data can be collected without placing undue burdens on businesses.