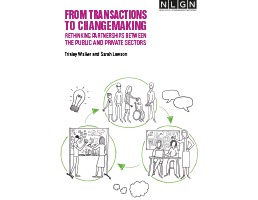 The role of outsourcing has been overshadowed by recent high-profile failings, including the collapse of Carillion, according to a report by a think tank.

From Transactions to Changemaking: Rethinking Partnerships Between the Public and Private Sectors by the New Local Government Network states that although this could provide the impetus for "a radical rethink, the national political debate is stuck in the past".

The Conservative government seems to prefer a "business as usual" approach, with rising government spend on outsourcing, while the Labour Party advocates taking everything back "in-house", says the report.

Both approaches focus on the means of delivery rather than the ends - and neither really addresses the fundamental challenge facing public services: rising demand, it adds.

The report calls for a fundamental rethink about the relationship between the public and the private sector in a changing world.

Offering a blueprint for a new approach to partnerships between the public and the private sector, the report outlines a package of measures including:

 Increasing the public oversight of the private sector through a new accountability code of conduct as well as a social responsibility accreditation system for all contracts over £200,000 and open-book accounting on large contracts over £1 million.

 Boosting the ability of the public sector to drive long-term value through partnerships by replacing social value with a stronger measure of social impact. For example, public sector commissioning bodies should be able to enforce payment of the living wage through all contracts, or the public sector will pick up the costs of low pay elsewhere in the system.

 A new government-backed review into improving transparency over private sector contracts for public services, to ensure that data on cost, quality and performance is openly available.

The survey in the report indicates that local government's appetite for outsourcing to the private sector is declining.