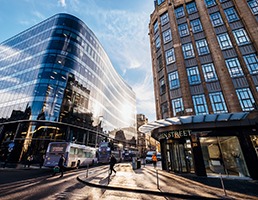 The scale of transactions in the 'Big Nine' office markets reached a new level in Q3 as Barclays agreed the largest ever deal - 470,000 square feet at Buchanan Wharf in Glasgow, according to property consultant GVA.

Overall take-up for the quarter was 64 per cent above average, which included record activity across the out-of-town markets. This brings the total for the first three quarters of the year to over eight million square feet - well positioned to break last year's record of 10 million sq ft for both city centre and out-of-town markets.

Barclays was not the only exceptional deal of the quarter, as Booking.com agreed to take 225,000 sq ft at Enterprise City in Manchester.

This inward investment is a further indication of the confidence that occupiers are showing in the UK's regional markets, says GVA.

Other key activity in Q3 came from the insurance and asset management sub-sector (9 per cent), with Royal London taking 190,000 sq ft of floor space in two deals in South Manchester and Edinburgh.

Against recent trends the level of co-working office activity dropped off for the first time since the beginning of 2017, amounting to 80,000 sq ft.

The Manchester market has again outperformed other cities, headlined by Booking.com, Royal London and Trafford Council, with a record total of over 900,000 sq ft for space taken.

GVA said this year it expected city centre take-up to break the 1.5 million sq ft mark for the first time.