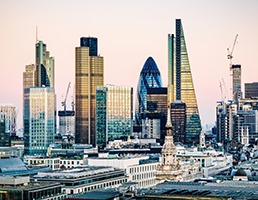 A JLL annual central London offices seminar has highlighted the strength of the capital's office market amid political and economic uncertainty, underlining its continued pull to both investors and occupiers.

Central London has seen sustained levels of both leasing and investment activity so far in 2018 and corporate property consultant JLL anticipates that the final numbers will match, if not exceed those recorded in 2017.

£12.2 billion of central London offices have been traded in the first three quarters of 2018 following a strong Q3 performance where £4.3 billion of transactions were recorded.

These latest year-to-date figures are only 6 per cent down on the corresponding period for 2017, a year that saw record investment volumes of £17.7 billion.

Currently, £4 billion of assets are identified as under offer and another £4 billion of stock on the market and although this suggests that activity towards the end of the year will remain strong, it also highlights the lack of investment opportunities compared with the same period of 2017 when £16 billion was available.

Take-up of offices across central London reached 8.3 million square feet at the end of Q3 2018, with 3.1 million sq ft leased in the West End and 4.5m sq ft in the City.

Active demand remains well above the 10-year average, with over 9 million sq ft of enquiries currently searching for space - with demand spread across the occupier spectrum.

Looking towards the transition at Brexit, and especially in the event of 'no deal', the leasing market could become relatively subdued as occupiers reconsider embarking on any new commitments in the short term.

This will be relatively mild, however, as most demand is driven by unavoidable lease events rather than expansion, says JLL.

Julian Sandbach, head of Central London Capital Markets at JLL, said: "At the beginning of the year it seemed unlikely that investment volumes would reach similar levels to the bumper numbers we saw in 2017, and now it looks possible that they could even be surpassed. Despite the degree of uncertainty around the outcome of Brexit, London continues to attract significant levels of overseas capital who continue to target prime assets.

"As the record levels of foreign capital demonstrate the majority of international investors feel that whilst London is subject to some short-term uncertainty, the long-term prospects for London as a global gateway city with a secure investment platform, underpinned by the long-term commitments of occupiers, remain unchanged."