Noise in open-plan offices is the 'real enemy' of productivity 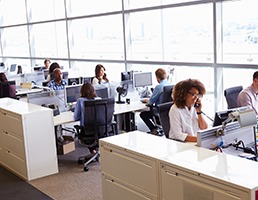 Open-plan studies place too much emphasis on collaboration and do not focus enough on the real cause of worker inefficiency - noise, according to the latest data from Unispace.

Research by the global workplace consultant shows that firms are erroneously introducing open-plan working environments believing that they will enhance staff productivity.

But Unispace's findings show that many companies are overestimating the amount of time that they need to spend in meetings and "collaborating" while underestimating the time for tasks requiring concentration.

The survey data was based upon research with more than 2,000 occupiers of office space across four different continents. Each region and service threw up its own particular requirements for space depending on work function, but distraction caused by noise was a ubiquitous theme.

Sam Sahni, regional principal strategist for EMEA at Unispace, said: "I would challenge the premise of the thinking that open-plan workplace solutions are introduced to increase workplace collaboration. For some organisations that may be the case, however, the origination of open-plan solution is rooted in the effort to rein in real estate costs. Open-plan layout is the most efficient space planning solution when calculating real estate densities (desks per square foot).

"Our data shows that on average, two hours per employee per day face-to-face collaboration is a reasonable amount to be effective. Of course, there are anomalous periods. However, organisations that plan for the more than the two-hour average are unknowingly facilitating an overly collaborative environment that is potentially disruptive for individuals and the business."

Unispace's study shows that those firms that tend to "over-collaborate" i.e. spend too much time in meetings, usually have environments that create barriers between different teams and departments - in effect, creating silos.

"Over-collaboration is not intentional but a 'boiling frog syndrome'. Conversely, employees working beyond walls often state a fear of missing out (FOMO)," explained Sahni.

"Firms where this is happening need to reassess employee feedback on their ability to focus, the cause of distractions and other factors that will diminish future productivity."

The three main reasons that companies set out to change their workplace is better collaboration, employee attraction and retention and cost savings, according to Unispace. And these numbers are broadly consistent across the US, EMEA and Asia-Pacific.  However, clients do not cite the need for focus and concentration as a key reason to change the office.

In fact, based on Unispace data, the industry may have underestimated the value of focus-based work and its physiological impact on satisfaction and productivity. Effective collaboration is important, but not at the cost of focus. With a number of working tasks requiring concentration, the obvious benefit of a balanced and choice-led environment should mean increased productivity.

According to www.Unispace.com data, workers in Professional Services firms spent most of their time in a typical working day in activities that required focus and concentration (66 per cent), with those in the US spending a higher amount of time concentrating (75 per cent). Those in banking and finance spent 60 per cent of their time concentrating. Technology sector workers spent the least amount of time focusing (55 per cent).

Unsurprisingly, given their need for focus-related tasks, an average of 20 per cent of professional services around the world rated their workplace "poor" for supporting work tasks that require concentration. This was particularly the case in the US and Australia.  This compares with less than 10 per cent of technology workers who rated their workspace poor for focus-based tasks and they were the most satisfied in this way with an average of 70 per cent rating their workspace "good" for concentrating.

In terms of ranking the top five inefficiencies in the workplace, all three professional disciplines rated noise in the top 2 problems with a lack of quiet areas also cited. In both professional services and the technology professions they also rated privacy as being a third key concern in the workplace.

"I think we profoundly underestimate the issue of sound in the workplace and the disruptive impact it has on the ability to be productive during the working day," explains Sahni. "So much of the dissatisfaction around the modern office is centred around the negative impact of the open-plan office.

"Many workers are of course trying to escape the tyranny of the noisy workplace by working from home or isolating themselves with noise-cancelling headphones, both of which for me represent the failure of so many ill-judged designs. I think that some of the biggest gains in the ability of workers to effectively perform their roles is creating a balanced and considered environment that allows them to get the job in hand done."

Sahni's offers this advice to companies that are concerned about the disruption created by noise.

 There are many solutions out there. Choice is not limited to enclosed offices or open-plan arrangement.

 Companies must consider what activities employees are undertaking. The variety of activities require a variety of environments.

 Address the causes of noise in the new design solutions. People walking past desks, people interrupting, phones ringing, noisy individuals etc, are sources of noise. How does the design of workplace limit some of these?

 Serendipitous interaction is important, But too much of it and you have gone backwards.

 Empowering users is important. With fixed desks as the only space to do work and managing people by sight will result in an unsatisfied workforce.

 Solutions should vary by organisation, sector, geography, user appetite and business objectives. Spaces provide mental constructs within which employees operate. Just because it worked for someone else, doesn't guarantee it will work for your organisation.

Sahni advised: "We strongly recommend organisations to find the time and effort to carry out engagement-led data collection prior to agreeing on a future direction for their workplace environments. Pre-implementation intelligence is key to ensure that your people and property cost centres click together. Also, let's not forget about being human-centric in workplace projects. It is equally important to prepare people for space, not just space for people."