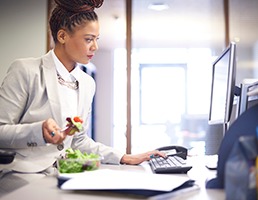 Unhappy workers are asking employers to create office breakout spaces so they can eat lunch away from their desks, according to new research.

A survey of 1,012 UK office workers carried out by interiors retailer, Furniture123.co.uk, revealed that 56 per cent of Brits don't have anywhere to eat lunch in their office, and one in three don't have any form of breakout space to enable them to get away from their desk.

As a result of this, 34 per cent of employees say they resort to eating lunch at their desk, which they feel is having a detrimental effect on morale and productivity.

Of those surveyed, 69 per cent feel they work less productively as a result of not taking a break away from their desk over lunch, and almost half (47 per cent) believe they would work more efficiently in the afternoons if they took a full hour for lunch.

The research also revealed that 46 per cent said they would like to get out of the office for a walk during their lunch break, but almost half of these (47 per cent) felt they had nowhere to go or didn't like the local area.

In addition, 35 per cent of UK workers take their lunch outside to eat when the weather is nice and a fifth (21 per cent) confess to running over their allocated lunch break.

When asked what breakout features they would like to see in the office, a designated lunch area topped the list (76 per cent), followed by sofas (70 per cent) and bean bags (62 per cent).

Completing the top five were a garden or terrace (59%) and a ping pong table (52 per cent).