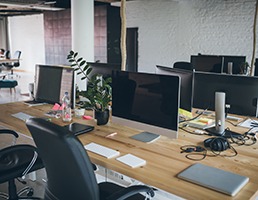 Big businesses in England and Wales are squandering £10 billion a year on under-used office space, a new study suggests.

The report by flexible workplace firm Abintra draws together data from its work with more than 100 corporations worldwide with government and property industry figures.

In London, the cost of office space being under-utilised is more than £4 billion annually, the report concludes, with large firms in other regions collectively squandering billions more.

Big employers with large office spaces are likely to benefit the most by addressing the issue and switching to flexible working strategies such as desk-sharing.

They can use workplace monitoring systems and specialist consultants to typically find an extra 30 per cent or more of space, says Abintra, which is headquartered in London with offices in Boston, US, and advises corporations worldwide.

However, the company doesn't expect the findings to stimulate a rush to smaller premises.

Tony Booty, a director, said: "Of course, it's possible to take the data and decide to downsize and save money, but most businesses choose to use their newly-discovered space to enhance the workplace, for example, by introducing new agile working areas, such as in-house coffee shops and informal meeting spaces. These have proven benefits for productivity as well as recruitment and retention, so being able to accommodate them without having to take on extra space is a huge advantage."

It's probable that the issue is even bigger than the report's conclusions, since its calculations are based on modest estimates of the amount of space saving possible and the number of people who work in offices.

The report 'Wasted Space: The colossal cost of under-used office real estate'  is free to download at https://abintra-consulting.co.uk/wasted-office-space-report/